Why Can’t I Find a Fix Pack / HotFix for Enovia IEF Client in 3DEXPERIENCE Media?

For years, Dassault has referred to the Integration Exchange Framework Client or IEF as the ENOVIA Integration Exchange Framework Client. However, starting in 3DEXPERIENCE R2015x, including 2016x and 2017x, the naming changes between GA and the release of Fix Packs/HotFixes, resulting in a bit of frustration for those trying to extract media for patching a 3DEXPERIENCE Open Application, such as an X-CAD Connector/Integration, on the client machines.

Read on to discover what the new naming has become…

For those system admins who patch 3DEXPERIENCE client workstations on their own, downloading, extracting and assembling media is a hard enough job, but when the name of a critical component changes between the GA release and the Fix Pack releases, a person could pull their hair trying to locate the right component installation. 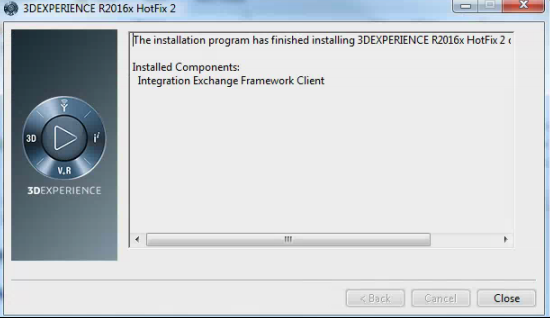 The component being written about here is the Integration Exchange Framework Client, which communicates between client installed X-CAD integration and the 3DEXPERIENCE server.

Instead, the 2016x FP package file is called HF_XCADDesignConnectors-V6R2016x.HF4.Windows64.zip, found within the OpenApps download. At the end of the HF install, it will report that “Integration Exchange Framework Client” was installed.

If any errors occur during the install, try shortening the path and file name, and make sure there are no spaces in it.

For more information or if you need assistance with this procedure please contact Razorleaf.

Additional notes, not to be included: