There were four major areas of focus for DriveWorks 17: Scalability, Deployment, 3D and the Web.

Scalability in DriveWorks 17 was driven by a massive project between DriveWorks and Gillette. The Razor Maker project (https://uncrate.com/gillette-razor-maker/) is a full featured DriveWorks web configurator that allows you to design and customize your own Gillette razor handle which will be automatically 3D printed and shipped to you. Naturally, a product like this is going to be immensely popular, requiring a significant infrastructure to support the massive demands. To this end, DriveWorks 17 introduces a lot of technical improvements to load balancing DriveWorks components and supporting the use of off-premises services like Amazon Web Services, Microsoft Azure, and Google Cloud.

All techno-babble aside, one of the most impactful improvements lies in changes to the licensing for DriveWorks Live. New technology allows DriveWorks Live licenses to be pooled across multiple servers. Licenses can be added without bringing any components offline. And most impressive, new OnDemand licenses allow you to handle overflow conditions without any users being rejected due to insufficient licenses. Signing an agreement with DriveWorks will allow access to licenses beyond those purchased in your DriveWorks Live user packs. Through Flex technology, DriveWorks will monitor your peak usage, spread that out over the month, and charge you a nominal fee that amounts to somewhere in the area of $1/day/user. This will allow you to monitor your DriveWorks Live usage and add licenses intelligently as your business grows. 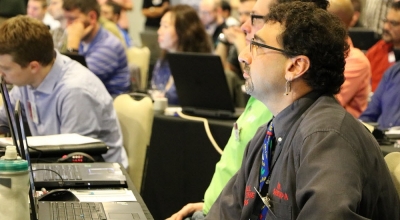 development, test and production environments. Improvements to DriveWorks tasks, like Copy Group, and access to these tasks through Specification Tasks allow you to automate the backup and deployment of your implementation.

DriveWorks 3D has once again taken more steps towards fully immersive, realistic experiences. New support for bump maps allows not only visual texture, but a truly realistic surface representation that takes the experience from looking like animation to looking like video. To boost visualization of systems, Drive3D technology will now allow you to turn components transparent so the user can see inside or through parts to see important details inside. But what can take your models to the next level is the new DriveWorks support for device motion tracking. With the ability to add camera entities to Drive3D models, truly immersive, virtual reality experiences are pretty much a reality in DriveWorks 17.

But the largest effort (two years of effort) have resulted in the new DriveWorks Web API. Implemented through a DriveWorks Live Integration Theme, the new web API allows bidirectional control of DriveWorks to truly customize and integrate DriveWorks into your processes. Two components work together to provide complete solutions. The DriveWorks server-side RESTful API allows your web sites and any other components access to DriveWorks groups, projects and specifications through simple, but powerful web service calls. This allows you to obtain information from your implementation as well as take action and pass information. The second component is a client-side JavaScript API that allows your web sites to customize the customer experience significantly further, and more simply than previous DriveWorks Live themes ever could.

The release of DriveWorks 17 SP0, along with its ever popular power packs like the Specification Power Pack and SOLIDWORKS Power Pack, will be here before you know it. So watch the DriveWorks community and your DriveWorks Today screen for notifications. As always, if you have questions, we have answers (if not, we might just make them up). Feel free to drop your questions, comments and other choice words below.